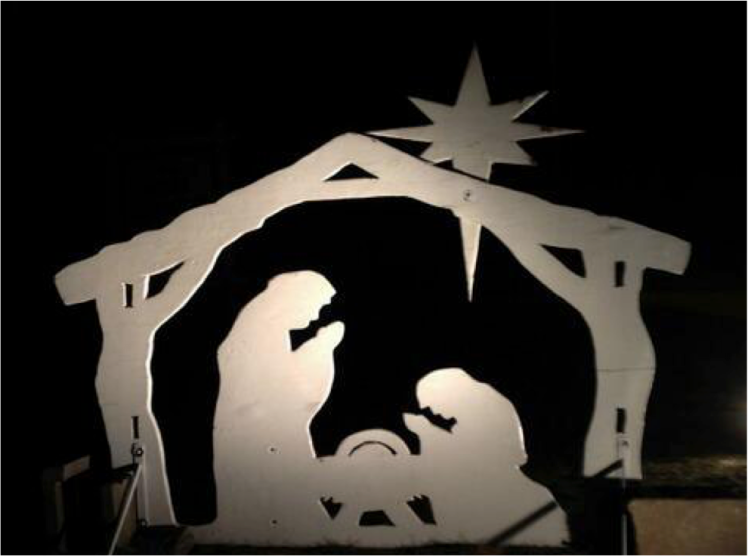 You’ve probably been celebrating Christmas since you were a baby and you probably think there’s nothing you don’t know about the Christmas story.   There actually isn’t a whole lot written about Jesus’ birth so some of this is speculation, but I wouldn’t share it with you if I wasn’t at least 51% sure.

Every Nativity scene you’ve ever seen is lying to you. Wow, that sounded harsh. The Magi saw the star that announced Jesus’ birth. As they searched their star charts they realized something wasn’t quite right. The star was seemingly over a fixed point. It wasn’t moving correctly. Now there isn’t an Old Testament prophecy that specifically mentions a star as an announcement of the Messiah. But these Magi, specifically are looking for the Jewish Messiah. Why? Well I think they are from Babylon. Fact #1 – The Babylonians were really into astrology. Fact #2 – The Babylonians were extremely interested in foreign religions. Fact #3 – The Babylonians conquered the Israelites in 586 BC. Prophets such as Daniel and Ezekiel lived in Babylon. Any Babylonian astrologer that wanted to know about Jewish prophecy would have been able to find plenty of writings on the subject. The Magi just figured the King of the Jews would be born in a palace so they stopped at Herod’s place first. Now I think what makes the most sense is that when the star reappeared that it moved to Mary and Joseph’s house in Nazareth and the Magi caught up with them there.

Here’s the most important point: If you want an accurate Nativity scene, you’re going to want the Wisemen traveling to baby Jesus. Depending on the size of the Nativity scene, you can put the Wisemen in the far East corner of your house to be true to scale. Now if it’s one of the glowy ones that’s in your front yard, my recommendation is to put them a few blocks away. I know that’s still probably not to scale, but the Nativity is just an illustration. Oh, and there weren’t just 3 of them. They brought 3 gifts with them. There probably was a whole harem with them. I don’t know how much a harem is, but it seems like more than 3. I’ve heard messages on the meaning of the 3 gifts – gold being a gift for a king, frankincense being a gift for a priest in worship, and myrrh being a gift of incense for burial. A strange gift for a baby, but a fitting one for this baby. Am I 100% sure on all this?  Nah, but I’m over my 51% threshold for sure.

There are actually a lot of quirks when talking about this census. The plainest, simplest reading is that Caesar Augustus issued the decree, Quirinius was the Governor of Syria, and Herod the Great was king over Judea. The problem is, there is not a historical record of an empire wide census. Quirinius didn’t become the actual governor until 6 AD and Herod the Great was dead by 4 BC. So when the heck was Jesus born? This is no doubt a tough one. I think there are 3 possible answers – Luke is wrong, the History books are wrong, or the understanding of the Greek is wrong. So can the bible be wrong? I vote “No.” You can read more of my thoughts about that HERE.  Luke being wrong is a bit of a stretch. He is considered a world-renowned historian. Luke has been attacked before, and new evidences keep popping up that prove he was right and the so-called “experts” were wrong. Don’t be angry at the experts. Luke was about the same age as Jesus. He lived during the same time, of course he’s a more accurate historian. So if someone is wrong, I think it’s the other historian. One problem though is that the other historian is Josephus. He’s pretty good too, and he was writing only about 50 years after Luke. I would prefer to not pit these two against each other, so I’d love to find a conclusion where they could both be right. One way this is possible is by saying that when Josephus says Quirinius didn’t become governor until 6 AD he may be speaking in a very official sense, while Luke might be referring to a more general sense. Quirinius was a military general over the area of Syria for about 15 years prior to him being named the official governor. Referring to him as a military governor would be pretty accurate. In this case they would both be right. Jesus can be born about 4 BC and thus Herod the Great is still alive and Quirinius can be the (military) governor of Syria. The other possible conclusion would be in regards to our understanding of the Greek. Greekatologists smarter than me (such as Daniel Wallace and Harold Hoehner) suggest that the Greek construction of the words might be saying “the census before Quirinius was governor” instead of “the first census while Quirinius was governor.” So there’s lots of potential options.

But here’s the most important point: the census that brought Joseph and Mary to Bethlehem was vital for 2 reasons. 1) Jesus has to be born in Bethlehem. The prophet Micah foretold that the Messiah would be born in that little town just outside of Jerusalem. 2) The census proves he was born there. If Joseph and Mary are there a few months earlier, then only they are recorded. However, Jesus was just born. The census would record Joseph, son of Jacob; Mary his wife; and their beautiful, 8lb 6oz baby Jesus. In John 7 the Pharisees basically say he’s not the Messiah because He is from Nazareth and not Bethlehem. I can almost picture Jesus whispering in their ear to check the census records in Bethlehem. Awesome.

Joseph Was Important Too

I know Joseph wasn’t as important as Mary. She deserves the attention (not worship… attention, only God deserves worship). But Joseph is a good dude. Not many people raise someone else’s kid as their own. He had to face a lot of public ridicule for his unwed baby-mama. But Joseph is not just some add-on. Joseph is the reason why Jesus can unequivocally claim to be heir to the throne of David. Today, we tend to want DNA evidence to prove lineage. That’s not how they thought back then. It was all about family-lines. When Mary got hitched to Joseph, Jesus would be in the family-line of David, Joseph’s forefather. But poor Joseph gets very little mention. When Herod started killing all babies under 2 years of age, God sent an angel to Joseph to go and protect his family. Joseph uprooted his life again, and fled to Egypt. Most Joseph’s are Awesome! (Man Stalin, Goebbels, and Smith really tried to ruin the name for the rest of us.)

Of all the people that the angels could have told that the Messiah has arrived, shepherds seem pretty low on that list. Kings, priests, rabbis, dignitaries, anyone other than sheep-folk, right? So why shepherds? I think it might be reflective of a couple different attributes. King David was a shepherd. God relates himself to a Shepherd, and Jesus takes on the same illustration. It’s a good foreshadow. Shepherds were also just good, average commoners. Jesus didn’t come only for the rich and famous. He came to seek and to save the lost. The poor and the sick recognized their “lostness” a lot easier. I think another aspect might be a practical one. What do shepherds do all day and night? They talk to other shepherds. The shepherds on that fateful night would have an all-time story to tell. The story also reveals something else. If the sheep are out at night grazing, it’s certainly not the wintertime in Israel. It gets cold, and the sheep would be in their barns. In fact, Joseph and Mary probably got to stay in the stable because all the animals were outside on that nice spring evening.

The Force Is Strong with this One

I’m just going to lay out some facts. In the movie The Nativity Story, Jesus’ mother Mary was played by Keisha Castle-Hughes. She plays Queen of the Naboo following Queen Amadala in Episode II The Clone Wars. Jesus’ step-dad Joseph was played by Oscar Isaacs. He plays the superstar rebel pilot Poe Dameron in Episode VII The Force Awakens. Jesus in Narnia, represented by Aslan, is played by the always awesome Liam Nieson who of course is the Jedi Master Qui Gon Jinn in Episode I The Phantom Menace. Is this all a coincidence??? Yeah, probably.

Look at the picture at the top.  Is it the Nativity scene or 2 Tyrannosauruses fighting over a table saw?